I found a fish today.

Ok he was dead already but I found him.

Every Sunday night during the summer everyone else sits in traffic going home from the Jersey Shore through Staten Island.

I would like to take this time to thank my maternal grandparents for buying a summer home in Breezy Point and leading my family there instead of New Jersey because now I come the opposite way of traffic when I want to go to and from the beach.

This weekend was truly lovely.

Friday night my company held a “Beer Friday” for an agency we work with. I was given the opportunity to plan it. The company chose a bar not far from our office called the Keg Room, which I would highly suggest to anyone looking for a cool, low key pub in midtown. The food was awesome and the service was impeccable. Nick came with me, and after drinking an unnecessary number of vodka & gingerales, I finally got to treat Nick to his birthday dinner (a few weeks late) across the street at Keens steakhouse, where we ate an impressive amount of steak.

This is my work mom Evelyn. She takes care of me when I wanna move to the mountains and never talk to humans again

This was Nick’s steak. We do not mess around when it comes to food.

After dinner (while suffering from the meat sweats) Nick and I took the train to Breezy.

Saturday started with everyone eating too much breakfast and then sprawling out on the beach. Dinner was a giant bowl of linguini and seafood at Kennedy’s, which almost made me cry tears of joy. See picture below for reference.

Serious thank you (from a serious face) for my family not wanting to spend their summers in New Jersey.

PS – I started the second book in a trilogy called Angelology by Danielle Trussoni because I liked the first even though it got bad reviews by almost everyone. Any books that deals heavily in history will catch my interest apparently. Cheers to a new book amici!

Today my mom’s family celebrated Father’s Day because we won’t be able to be together tomorrow.

It was also the one year anniversary of the death of my great aunt, so my family and I went to a mass at a church in Brooklyn.

After the mass, my mom’s siblings and their families came to my house to make pizza. So here are some pictures of the mess that ensued.

And sea food and frozen drinks and heat. Bring it.

As I have said countless times, I am a lazy person but I really love food.

So this is where BuzzFeed’s three ingredient food recipe videos come in. They make some really fun stuff. I already tried to make the three ingredient pancakes, which ended up being a terrible idea.

This Sunday, we are trying to make Nutella Brownies. Yes that is correct. Nutella brownies in three ingredients.

Side Note: As a child of Italian immigrant family, Nutella was a major staple in my lunch box and kids thought it was the weirdest thing that I would bring chocolate sandwiches to school. But really, what the heck is wrong with people? Why wouldn’t people love chocolate sandwiches? But anyway, now people love Nutella and its great.

Ok so here we go! (Do me a favor, play the below vid and read/try these out man. TRUST)

3-Ingredient Nutella Brownies That I Tried First Just in Case

Things you will need:

This is awfully exciting for me.

Preheat your oven to 350 degrees.

Measure out one and a quarter cups of Nutella into a medium sized mixing bowl. Nutella is really thick so I suggest a giant spoon. Good luck with that one.

Crack both eggs onto the top of the Nutella in the mixing bowl. Don’t mix yet.

Empty the 1/2 cup of flour into the bowl with the other ingredients and mix thoroughly.

Because the 3 things you’re using to make these brownies are so distinct in texture its very strange mixing them for the first second, but then its fine. Just make sure there are no flour pockets! hate those stupid things. They ruin everything.

Grease your brownie pan. I ran out of Pam so I used Extra Virgin Olive Oil spray that I found in a cabinet. Still works. Pour your delicious mixture into the now greased pan. In the BuzzFeed video, their combo was pretty smooth and flowed in. Mine was more spongey so I had to scoop a little, but everything is A OKAY because we’re making Nutella Browniessssss.

Place the brownie pan in the oven for 15 minutes. The video didnt say it (obvs) but I’m pretty sure I should have spun the pan around somewhere in the middle of that 15 min session because one side was a little undercooked but we still ate them so whatever.

Once the brownies are deliciously finished (and your whole home smells like Nutella – score) take the pan out and let it sit for about 10 minutes to cool off.

THEN CUT THEM AND STUFF ALL OF THEM DOWN YOUR THROAT BECAUSE THESE ARE FRIKIN DELICIOUS.

No joke, these are fantastic brownies and I am giving BuzzFeed’s video two thumbs way wayyyy up.

So test out the Nutella Brownies and tell me what you think! I hope yours come out as delicious as mine and nothing like the stupid pancake I tried to make last time.

GUESS WHAT DAY IT IS

The first Friday of June in the United States is National Donut Day. Really, no matter how you choose to spell it, donut or doughnut, its a good frikin day. And best part is, companies participate by GIVING AWAY DOUGHNUTS FOR FREE.

Before celebrating the best national holiday in America, we shall begin with a brief history lesson.

National Do[ugh]nut Day was created by the Salvation Army in June 1938, to honor those who served donuts to soldiers during World War I, according to Wikipedia. Do with that info what you will, friends.

Since then, people have been celebrating the greatest round snack to ever come out of an American factory (kinda celebrating.) It was recently that the holiday really gained its sugar-coated wings when doughnut shops all over the country began celebrating with freebees or discounts on the holey mass of fried dough.

After a little research (not too much on my part because people love doughnut day and there are, like, a million articles about it) I found some extremely delicious info.

USA Today has some great info graphic stats up on their website which I couldn’t help but devour (lol get it? play on words because you devour doughnuts? its funny, aright.) My favorite, being the lover of words that I am, is below, along with some other super important facts.

ok ouch. but really, who cares? donuts are delicious. Well worth the calories!

So, without further adieu, here are some places offering up that circular piece of heaven for free (or almost free, both are pretty good, if you ask me.) 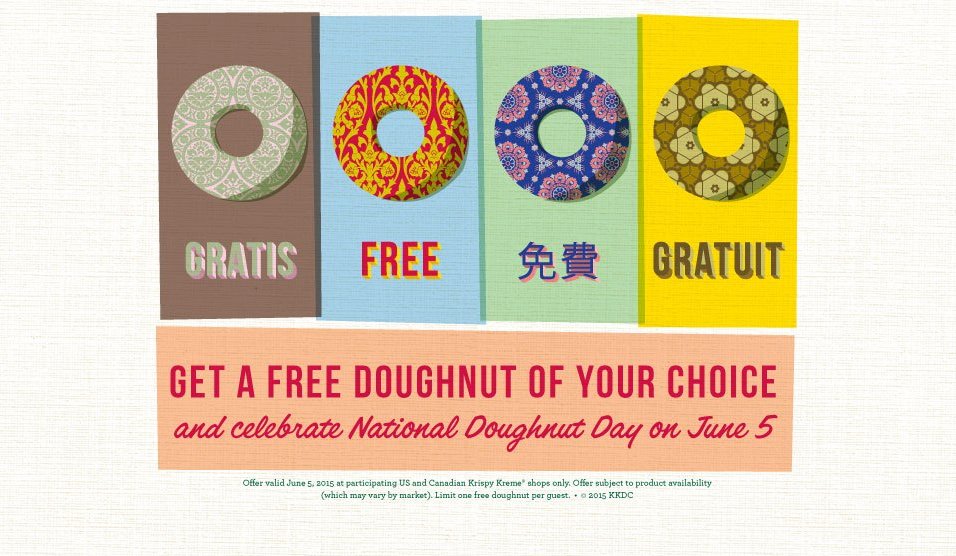 There are also a bunch of local places that are joining in the merriment. Check out shops in your neighborhood and see what you find! If there are any that you love that I missed, let me know! I would love to add more.

Thanks to Thrillist, I learned that Jiffy Lube (yea man, the car place) is celebrating National Doughnut Day and National Tire Safety Month (which happens to be June) by offering complimentary air pressure checks for your tires. While they’re checking your tire pressure, you can also check out some free donuts at their service centers! Technically this isn’t nation wide, and is only being offered in locations in Houston, Philadelphia and Florence, South Carolina. But I really needed to add it to my list because YEA JIFFY LUBE.

So everyone go out and enjoy your little fried dough frisbees. Can’t wait to hear about everyone’a National Donut Day!

Check out the 'gram

There was an error retrieving images from Instagram. An attempt will be remade in a few minutes.